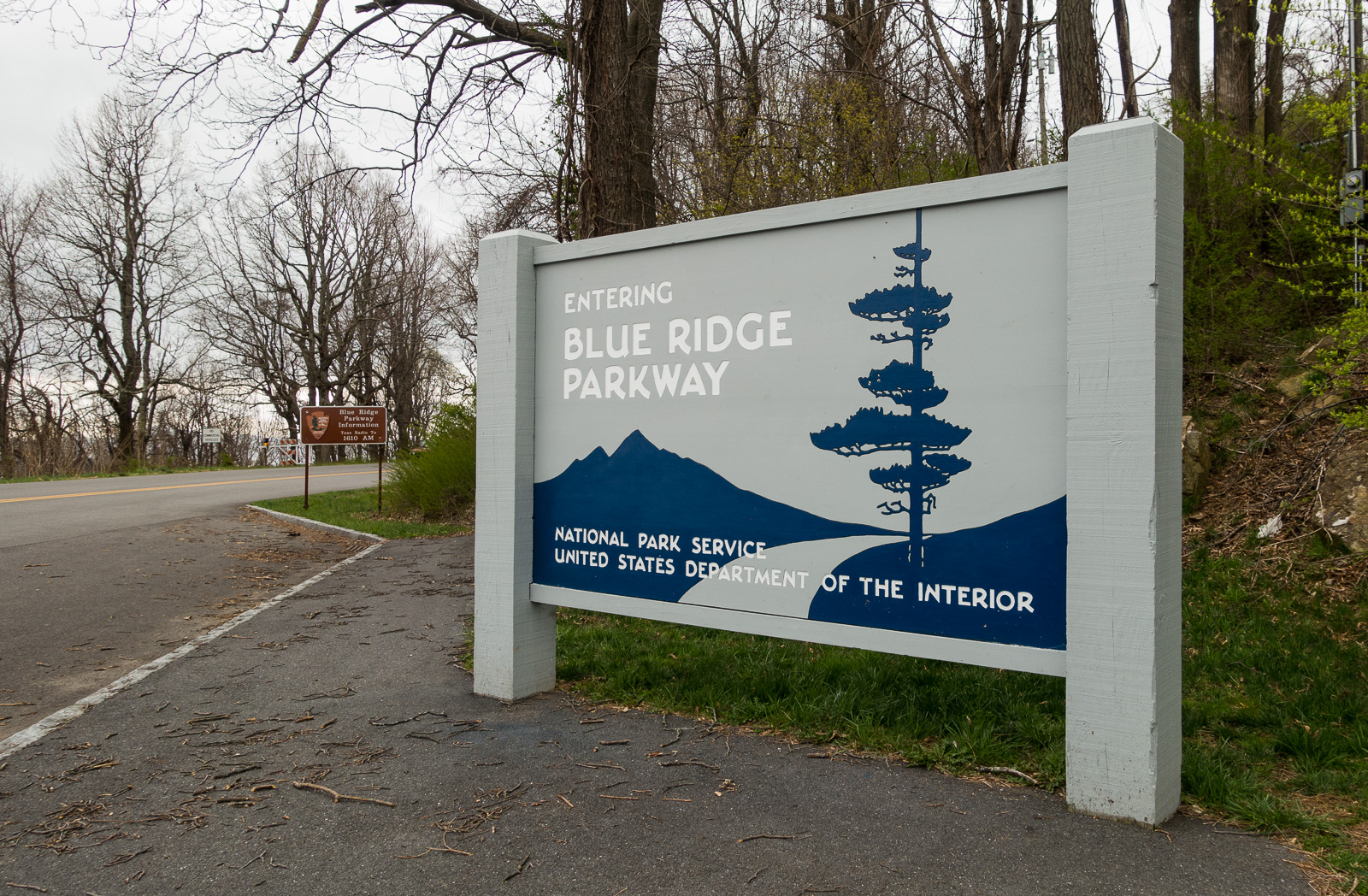 March 31 – April 3, 2016: Leaving Charlottesville, we entered the Blue Ridge Parkway at the northern most entrance (where we exited Shenandoah National Park) and proceeded to drive six miles before our first stop.

Here we hiked to the top of Humpback Rocks – a 700 foot elevation gain over approximately one mile with a most rewarding view at the top. The jagged shape of the rock outcrop reminded me of Yesnaby Sea Stacks in Scotland. Despite the view being amazing, it was a bit terrifying as well. I was literally in tears with an unsubstantiated and overwhelming fear due to a repeating visual (in my head) that one of us was falling off the rocks. That part was not fun.

Our next stop was at the Ravens Roost overlook for an expansive view. We then exited the Blue Ridge Parkway and stopped for some nachos and beer at Devils Backbone Brewing Company. The grounds were beautiful with multiple outdoor seating areas, fire pits, and a stage for performances and it reminded me of our visit to the well landscaped Stone Brewing Company. Our next stop was Blue Mountain Barrel House (we just visited Blue Mountain Brewery yesterday) and then we drove, through the Virginia countryside of rolling hills and twists and turns amongst green pastures and plantations, to our KOA accommodation for the night near Lynchburg. The KOA was lovely, with beautiful grounds and friendly staff, and we did a quick walk around an on-site hiking trail that circled a fishing pond before retiring for the evening.

The next morning we made a stop at the Natural Bridge. The Natural Bridge is on the register of National Historic Place and was, at one point, owned by Thomas Jefferson and continues to be privately owned today. Rumor has it that the government will be taking ownership which hopefully will discontinue the evening night light show that is told alongside the biblical story of creation. The bridge was impressive and stands taller than Niagara Falls! The rest of the complex includes a not-so-worth-it waterfall about a mile down a walking path. Tickets were $20 per person.

We then hightailed it to the trailhead for McAfee Knob. We were excited to check out the most iconic and photographed point on the Appalachian Trail (and perhaps slightly less excited for the 7.8 mile round-trip hike with an elevation gain of 1740 feet to take it all in). But, it was totally worth it and we were rewarded with amazing views and even had the knob to ourselves for a few minutes. Also, bonus points because I didn’t cry or fear us falling over the edge as was the case with the summit of Humpback Rocks.

On our descent we encountered a young couple from Virginia Tech. He had just sprained his ankle and was in great pain. Two gentleman were assisting by wrapping up his ankle but they were on their way up so we took over. We found a large tree limb to use as a crutch but he still wasn’t able to get more than a few steps. His girlfriend was able to obtain cell service and contact emergency services for a rescue. We waited with them for over an hour, were able to confirm rescue was on their way up the mountain, gave them our water, and then hightailed it down the mountain because it was getting dark. At the bottom we saw the rest of the emergency team and confirmed that they had located the couple and were on their way down the mountain. An unfortunate incident but thankfully nothing serious.

We decided to just check-in to the nearest campground, affiliated with Dixie Caverns, as there was only one option within an hour radius. Can’t say I would recommend the place, and despite not having access to showers or restrooms, it did have wifi and cell service. Priorities people.

Our next day kicked off with a visit to the world’s largest man-made star in Roanoke. I can imagine it is pretty cool lit up at night.

The rest of the day consisted primarily of driving south on the Blue Ridge Parkway. Unfortunately all attractions and services were still not yet open for the season and the only area we explored was around Mabry Mill. We exited the parkway in Galax and, instead of visiting the Blue Ridge Music Center (closed!), we had a late lunch at Creek Bottom Brewing; a seemingly random establishment with good food and beer.

After re-entering the Blue Ridge Parkway in Galax we crossed into North Carolina!

Our accommodation for the evening was Princes Park Campground right on the Blue Ridge Parkway. It is one of two campgrounds that have opened for the season but with no facilities yet (no flush toilets, no water). However, the campground has sites right on the lake and we were able to scoop one up. Unfortunately, it was a super windy evening (a tree snapped and fell right in front of us) so we weren’t able to enjoy much of the evening outdoors.

We continued on the next day, with a goal to reach Asheville, North Carolina. Along the way we took the short 4.6 mile road off the Blue Ridge Parkway to summit Mount Mitchell, the highest peak in the United States east of the Mississippi.

We did end up making it to Asheville but not without mishap. As we were barreling down the mountainous roads, one of our brake calipers became stuck. Thankfully, Michael was ingenious enough to realize what was going on and took the wheel off and confirmed. But, unfortunately, it was Sunday and the fix required finding a taxi (harder that you can imagine; failed hitchhiking in between) for an autoparts store visit. Luckily, the relatively local Advanced Auto Parts store had the requisite 1987 Dodge B250 right passenger side brake caliper (Seriously, WTF?!. Let’s not complain though.) and Michael had the mad skills to fix that shit.

A few hours later we were on our way to our Asheville destination. Enjoy some additional general Blue Ridge Parkway photos: