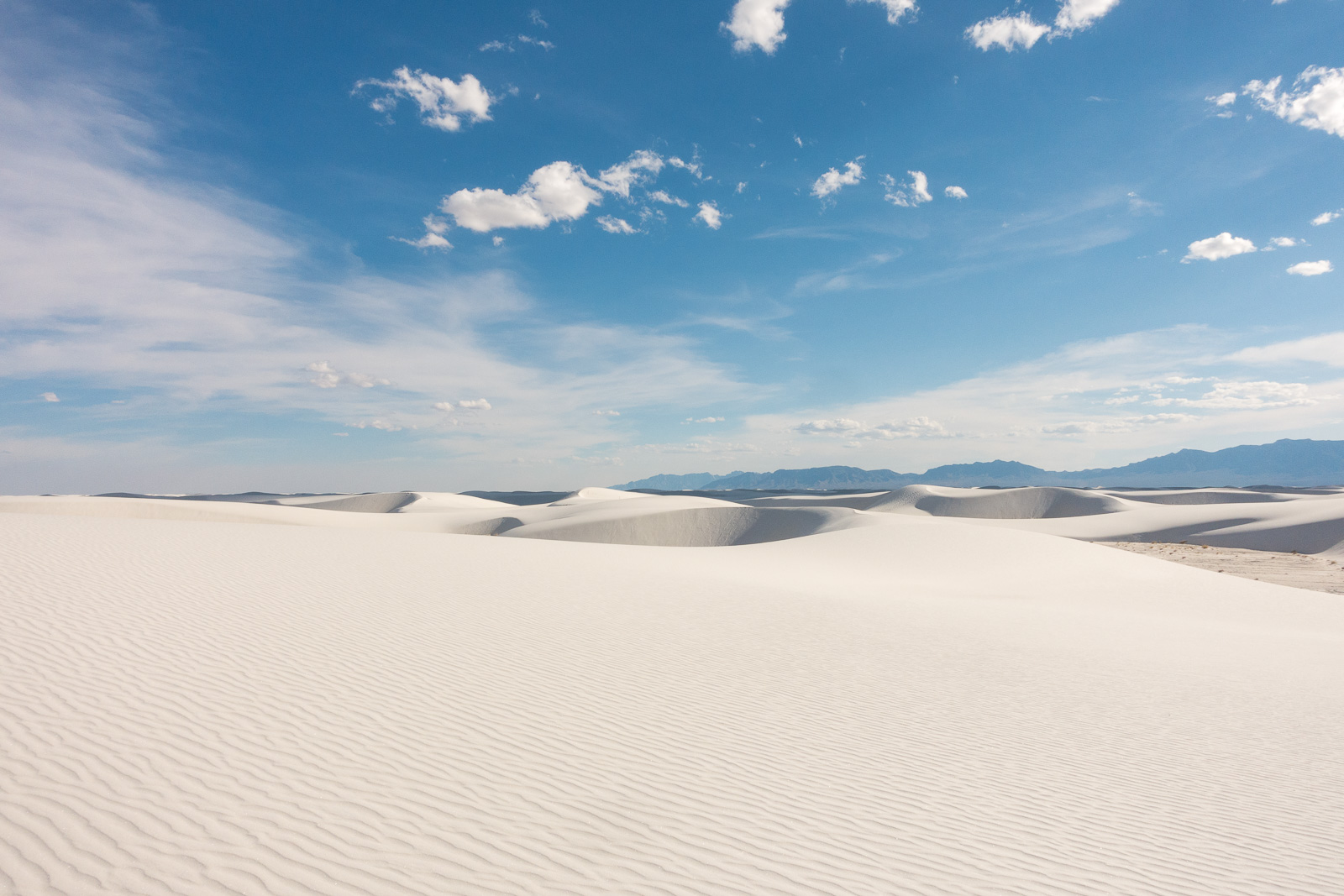 May 14 – 15, 2016: We arrived in Alamogordo, New Mexico in the late afternoon and decided to see if we could catch the sunset in White Sands National Monument.

White Sands National Park is a surreal landscape of white gypsum sand dunes covering a 275 square mile area. Yes, gypsum = sheetrock material. The gypsum was deposited 250 million years ago at the bottom of a shallow sea. These marine deposits were uplifted when the Rocky Mountains were formed 70 million years ago and then, beginning 10 million years ago, the Tularosa Basin was created from the collapsed deposits. The remaining sides of the formation are now the San Andres and Sacramento mountain ranges that surround the basin. Gypsum is rarely found in the form of sand because it is soluble in water; however, no river drains the Tularosa Basin and the gypsum is trapped within the basin.

After a short interpretive nature walk, rather than viewing a spectacular sunset we were treated to a lightning storm. This further enhanced the surreal atmosphere and was an event to behold unto itself.

We hightailed it out of the monument as it started to rain and treated ourselves to burgers and fries at Blake’s Lotaburger. Their specialty was a delicious green chile topped burger.

The following day we visited the largest pistachio at McGinn’s Pistachio Tree Ranch. The free samples of various flavored pistachios and pecans served as our breakfast and we also purchased some treats for the road. My favorites are the Habanero-Limon flavored pistachios (lime juice, lemon juice, and habanero pepper on the shells) and the Milk Chocolate Covered Chili Pistachio Brittle (only swapping the milk chocolate for dark chocolate could have made this better).

Our next stop was the New Mexico Museum of Space History. The museum contained a hall of fame honoring those individuals that have significantly contributed to space exploration or the theories and research that have indirectly furthered mankind’s understanding of our universe. The local contributions to space exploration and science were highlighted and included these sites:

There were also numerous technical exhibits and an outdoor space park showcasing rockets and rocket sleds. I found the sled, used to test the human response to rapid deceleration, particularly interesting.

We then returned to White Sands National Monument to enjoy its daytime beauty. We had such a good time hiking the dunes (Alkaline Trail) and marveling at the landscape that we stayed for sunset. Although we didn’t do it (in retrospect, we should have), folks also bring or purchase small circular sleds at the gift shop and use them to sled down the dunes. What fun!

I’ve noticed a pattern with my favorite national parks (Sossusvlei, Death Valley, Joshua Tree, Bryce Canyon). To me, they are all super hypnagogic and it is this quality that makes them stand above the rest. White Sands National Park has been added to that list.

TIP: If you’d prefer to explore White Sands National Park without having to camp, check out these Alamogordo, New Mexico accommodation options.