In The Beginning There Was… Thailand, Cambodia, and Vietnam 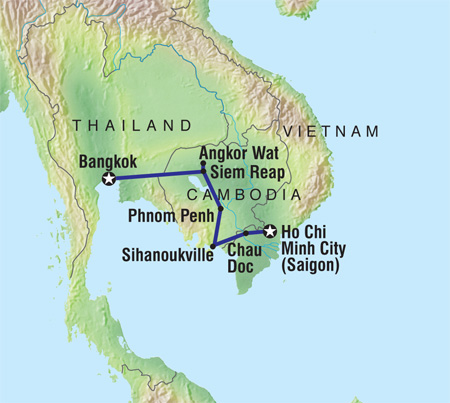 Over the next three weeks we booked flights, decided on vaccinations, and procured visas for Vietnam. And then… off we went! A summary of our itinerary follows with links to more detailed posts.

April 3 – 5, 2010: Arrived Bangkok, Thailand. Had two nights and one day to explore the city before departing with our tour group.

April 5 – 7, 2010: Departed Bangkok, Thailand and crossed the border into Cambodia. Destination: Siem Reap where we spent time exploring the town and Angkor Wat.

April 7 – 9, 2010: Departed Siem Reap and arrived Phnom Penh where we spent time learning about the atrocious history of the Khmer Rouge regime at the Tuol Sleng Museum and the Killing Fields of Choeung Ek.

April 9 – 11, 2010: Departed Phnom Penh and arrived Sihanoukville where we explored the beach town.

April 11 – 12, 2010: Departed Sihanoukville and crossed border to Vietnam. Destination: Cần Thơ where we viewed life on the Mekong river.

The whole experience was magical; and the beginning of so much in our lives.