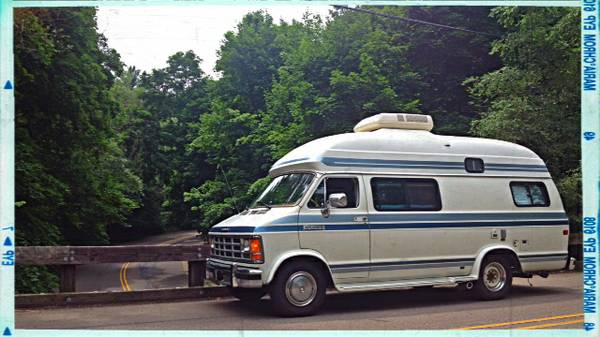 After a two week search on Craigslist and eBay, Camper Dan was selected to serve as our new home for an upcoming road trip!

We will outline our search criteria and decision process in another post; but, we just returned to New Jersey from Michigan where he previously lived.

We decided to drive to Michigan because ultimately it was less expensive and also gave us more flexibility. We departed on August 21st and, other than stopping for lunch at The Gamble Mill Restaurant and Microbrewery in Bellefonte, Pennsylvania, we drove all the way to Ann Arbor, Michigan in one very long day.

Once in Ann Arbor, we visited Jolly Pumpkin Ann Arbor Café & Brewery and checked into Red Roof Inn Ann Arbor – U of Michigan South for one night. The next day we drove to Grand Rapids, Michigan to visit Founders Brewing Co. and HopCat (rated #3 beer bar on planet earth by Beer Advocate) before making our way to Kalamazoo, Michigan. In Kalamazoo we checked out the Eccentric Café and Bell’s General Store before spending the evening at a Microtel Inn & Suites.

After much anticipation, the next morning we met Camper Dan and his owner in our hotel parking lot. We were given a brief overview of Camper Dan’s features and off we went! We wanted to enjoy a night in Camper Dan on our return journey so we booked a night at a KOA campground in Ohio. Upon arrival, we cooked dinner and took in our new surroundings –Camper Dan will be our home for a few months! We were getting excited!

The next morning we departed Ohio to return home to New Jersey and our excitement started to fade. After a fuel stop, Camper Dan stalled whilst getting back onto the highway. Eventually he started back up but we experienced yet another stall after later stopping at a rest area. We tried to have Camper Dan towed but they were unable to put Camper Dan onto a standard flatbed tow truck because his wheel base was too long. While we were waiting for a different tow truck Camper Dan started up again so we drove him to the AAA recommended garage in State College, Pennsylvania. It was already past closing time but, since we drove to Michigan, we were able to drop off Camper Dan and then drive in our car to find a place to rest our heads for the night. We checked into a Sleep Inn and grabbed a quick dinner at the TGI Fridays next door. In the morning we visited the local shopping center to kill time and even had another chain restaurant meal at Denny’s before we heard from the garage. However, the garage was no help – they simply suggested that maybe it didn’t consistently start because we were out of fuel (which we weren’t!). Since Camper Dan started up we decided to try to make it home and, once on familiar soil, figure out our next steps. This plan worked and, despite another few stalls, we eventually made it home to New Jersey.

Because we’re leaving for Scotland in a few days and, once we return we’re scheduled to depart in Camper Dan for Canada, we decided to have Camper Dan checked out by a mechanic while we’re in Scotland. Fingers crossed that Camper Dan will come out with a good bill of health (at minimal cost!). Then we can more enthusiastically welcome him into our family!