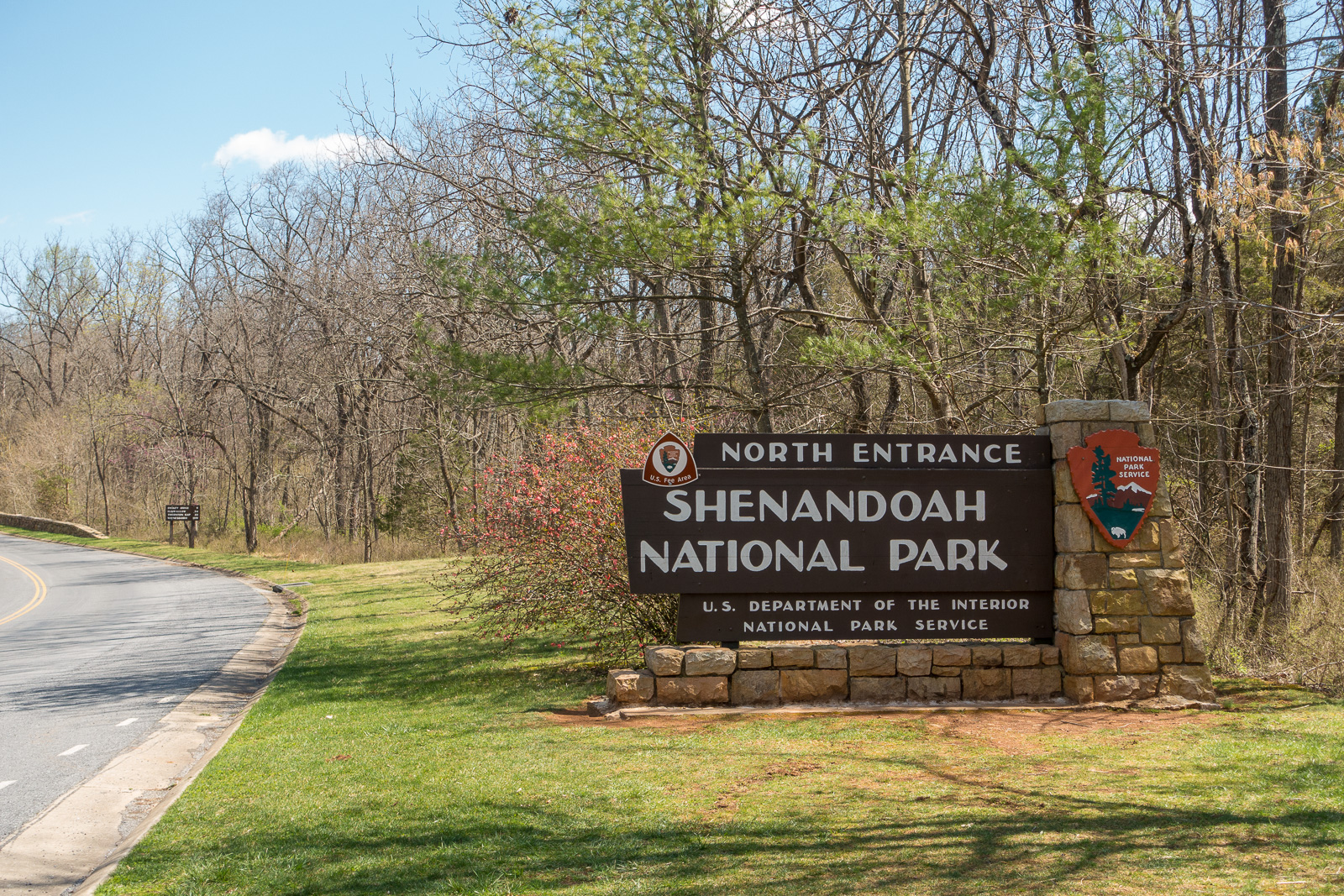 March 28 – 30, 2016: From Harpers Ferry, West Virginia we made our way across the Virginia border and entered Shenandoah National Park and the Skyline Drive at the north entrance in Front Royal, Virginia.

We drove approximately 32 miles, stopping at various scenic overlooks to marvel at the views of the Shenandoah Valley below, before exiting the park at the Thornton Gap entrance station for the evening. Only one campground, located further south in the park, has opened so far this year so we instead stayed at a KOA in Luray, Virginia situated amongst rolling hills and farmland.

The next day we returned to Shenandoah National Park and continued south on Skyline Drive. The weather was cold and windy but we didn’t want to miss out on hiking so we bundled up to do some shorter hikes. We started with Stony Man Trail. We had already viewed Stony Man – a large rock jutting out from the landscape – from an overlook and the trail was a 1.6 mile circuit hike up Stony Man himself. The view at the top was a beautiful panoramic view of the Shenandoah Valley below.

Next up was the Dark Hollow Falls hike. This was a steep 1.4 mile round trip trail to view a number of nice waterfalls; . There were people lounging around some of the falls so the moments were less picturesque. However, the largest being seventy feet high. I’ve heard that this hike can become quite congested in high season so I’m sure we have nothing to complain about. We’ve just become accustomed to being the only ones on many trails.

Our last hike of the day was the Appalachian Trail-Hawksbill Loop; a 2.9 mile circuit hike with 860 foot elevation gain. We selected this hike for its continuous beautiful views with a 360 degree view at the summit. We anticipated reaching the summit for sunset and brought our headlamps for the return trip down. However, we miscalculated by a long shot and arrived at the summit around 5:30pm. With sunset not happening for another two hours we lingered for a while enjoying the view but ultimately decided to return before sunset. It was just too damn cold and super windy!

We spent the evening at the Big Meadows campground within the park and had our first campfire of this 2016 Road Trip.

On our last day in the park we enjoyed our favorite hike. Actually, every hike we did was better than the one prior in Shenandoah National Park. Our favorite was the Bearfence Rock Scramble; only one mile long with a 311 foot elevation gain. It required climbing over rocks and hoisting yourself up and over boulders. Some of the rock scrambles were on the edge of a cliff so, for someone who has a fear of heights like me, it was a bit frightening at times. However, if you could stand to look down, the views were amazing. This is another hike that I heard got quite busy so I’m grateful we had it pretty much to ourselves with no pressure to move quickly through the rock scrambles or to move past the breathtaking views.

After the Bearfence Rock Scramble we drove south on Skyline Drive through the rest of Shenandoah National Park and stopped at some overlooks along the way to take in some final vistas.

A number of the trails we hiked comprised sections of the Appalachian Trail. I find this pretty cool and I think I may be satisfied enough to mark off the tentative “hike Appalachian Trail” item from my life list. Clearly we didn’t come close to even hiking one state of the trail but I can say that I have a greater appreciation for the difficulty as well as a realization that I am not cut out for the journey. Hats off to those folks who accomplish any substantial portion of the Appalachian Trail; you guys are hard core.

Overall, we both found the park to be nice but, because nothing has bloomed yet, it was quite stark. I’m sure a lush landscape would make it all the more appealing. Also, hailing from the northeast, these forested landscapes are familiar territory. It was still stunning but there’s something to the hues and rock formations found in places like Death Valley and Bryce Canyon National Parks that I find absolutely mesmerizing.

TIP: If camping isn’t your style then check out this beautiful modern farmhouse Airbnb in Luray, Virginia. I’ve followed the owners story for a little while and, whilst I’ve never stayed in their property, I wholeheartedly believe that it would be amazing. Also, use this link (and then search for the property above) to get a $20 Airbnb credit.